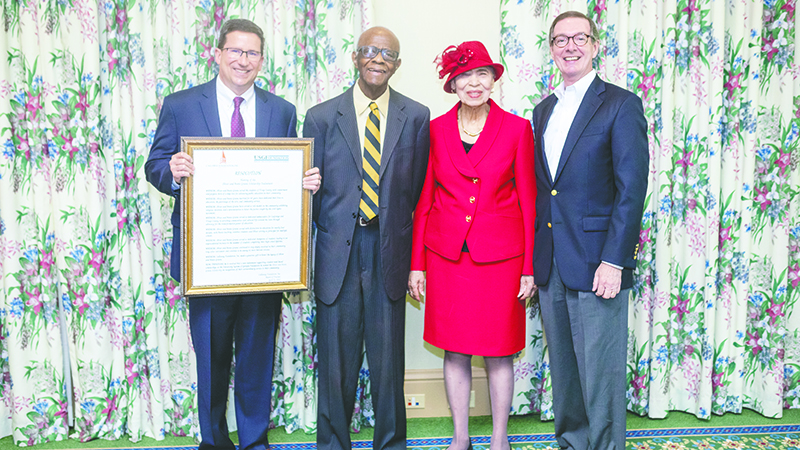 Callaway Foundation, Inc. announced this week that it was establishing a new scholarship endowment honoring the extraordinary service to public education by local retired educators Oliver and Annie Greene.

According to a press release from the foundation, the endowment will support needs-based scholarships for Troup County students attending any of the 26 institutions in the University System of Georgia. The awards, to be known as the Oliver and Annie Greene Scholarships, were created by a gift to the University System of Georgia Foundation. The first scholarships will be awarded by June 30.

“Annie and Oliver Greene have served the students of Troup County with commitment and purpose, born of a deep love for advancing public education in their community,” said a resolution adopted by the Callaway Foundation Board of Trustees.

“We are proud to honor the legacy of Mr. and Mrs. Greene by helping students achieve their educational goals, something the Greenes have championed all their lives,” he said.

It was education, in fact, that brought the couple together. Annie Lucille Tarver and Oliver Nathaniel Greene joined the then-segregated Troup County School System in the same year, 1955. She had grown up in Hinesville before moving to Hogansville at age 12 when her parents took teaching jobs there. He was a fourth-generation Troup County native, one of 15 children of a farmer and a domestic worker and teacher. Annie was the first art teacher at Ethel Kight High School. Oliver taught history and English.

“Coming into the school system at the same time was what threw us together,” Annie said in an oral interview for Troup County Archives in 2003, recounting how Oliver, as an advisor for the junior class, recruited her to help decorate for the prom . They married in 1957 and recently marked their 65th anniversary.

“She was the greatest gift I ever received,” Oliver said, also in an Archives oral interview.

Oliver earned his bachelor’s degree at Morris Brown College and his master’s at Columbia University. He became a much-honored administrator, serving as principal at multiple LaGrange schools.

Both Greenes achieved distinction — and a slew of awards — in their professions and for their prodigious commitment to church work and community service.

Following retirement in 1990, Annie developed her gifts as a yarn artist, and her work has been widely exhibited and collected. Oliver led educational programs sponsored by his fraternity, Alpha Phi Alpha.

Both Greenes authored books, hers using her art to illustrate stories from her childhood; his a history of African American churches in Troup County.

“The Greenes continued to stay deeply involved in their community long after retirement and continue to be among its most beloved citizens,” the naming resolution said.

The Greenes have two children, both of whom followed their parents into distinguished careers in education. Dr. Oliver N. Greene, Jr., a noted vocalist and ethnomusicologist, is associate professor of music at Georgia State University. Zinta G. Perkins became an art teacher, like her mother, and later a principal, like her father. She retired as principal of Pebblebrook High School in Cobb County.

“Our family would certainly want to thank the Callaway Foundation and the University System of Georgia Foundation for honoring our parents in this way,” Perkins said. “Both of our parents firmly believe in the importance of education in providing opportunities and in enriching the lives of individuals. With this scholarship, the youth of Troup County can be provided financial assistance that is needed.”

Kirby Thompson, Acting Vice Chancellor for Development at the University System of Georgia Foundation, cited a critical need for student scholarships like the Greene grants.

“Even with the support of Pell grants or HOPE scholarships, many students cannot afford to attend an institution,” Thompson said.

The Oliver and Annie Greene Scholarships will be part of the USGF’s “Hometown Scholarships” program, which allows donors to provide grants for students in designated Georgia counties.

Perkins, recalling how her father walked four miles each way to attend school in LaGrange, said the scholarship in her parents’ names is a way to continue the legacy to which they devoted their lives.

“My brother and I know that our parents encourage many family members and students to go to college or learn a skill,” he said. “From the countless students who eagerly speak to them when we’re out eating or those who drop by our home to visit, we know our parents made a lasting impact on so many lives.”

The Callaway Foundation Board of Trustees held a luncheon to honor the Greenes and announce the scholarship endowment.

“We are excited to support these scholarships which will give a boost to good students who have a financial need,” Penn said. “The Greenes are inspiring people, and they have a wonderful family. It is an honor for us to be part of naming a scholarship for them.”

Callaway Foundation, Inc. and Fuller E. Callaway Foundation, established in 1943 and 1917, respectively, have contributed more than $486 million for a wide variety of religious, charitable and educational opportunities primarily in the State of Georgia, with particular emphasis on LaGrange and Troup County.

Anyone interested in learning more about the USG Foundation or making a contribution to the Oliver and Annie Greene Scholarship Endowment, contact Kirby Thompson at (404) 962-3056.