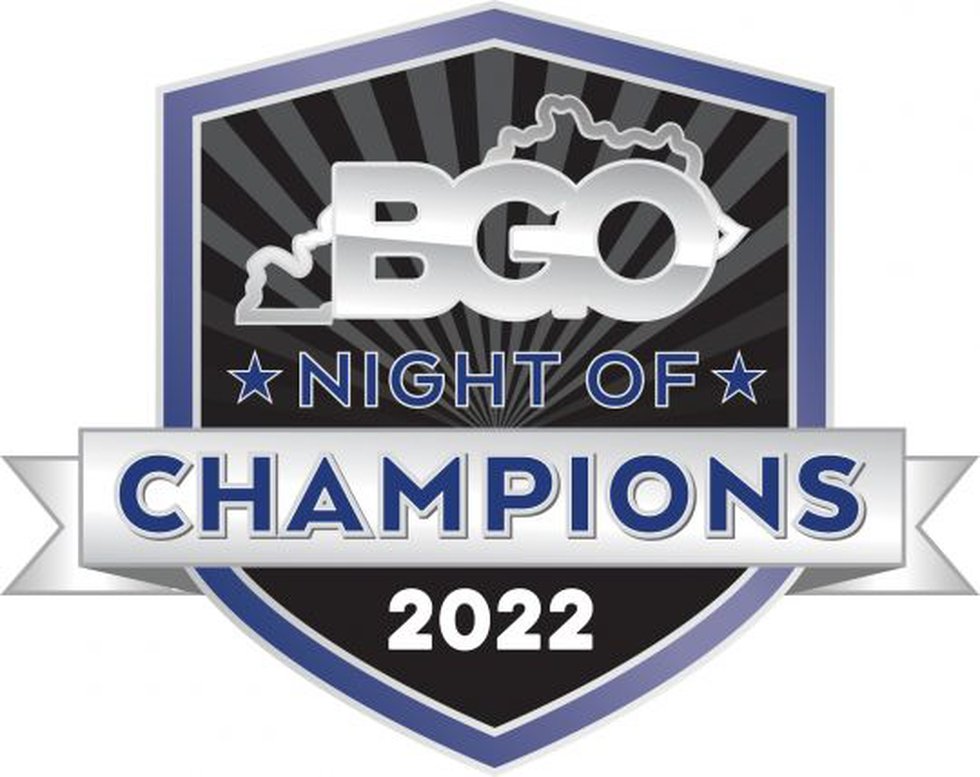 The evening is a celebratory event for those individuals not always recognized with awards or accolades. The BGO Champion scholarship was awarded to two student-athletes with each winning a $2,500 scholarship.

This scholarship is unique as it honors student-athletes at the high school level who have distinguished themselves by overcoming adversity or injury, and returned and excelled beyond expectations.

“It’s been filled with bumps and it’s been hard at times, but optimism is a great word to describe what I’ve been through,” said Padgett. “I’ve tried to look on the positive side of things. This award is a great award. It means a lot to my family and I and it’s an honor to be here.”

“It’s really nice to be honored amongst so many amazing athletes it means a lot,” said Hall. “It’s an honor honestly to get this scholarship so I’m just super excited and excited to be here.”

Their biographies from the BGO are listed below:

Connor was your typical active kid that loved to play football and basketball and enjoyed all aspects of the game, especially the adrenaline rush that came with it. However, all of this came to a screeching halt at the age of seven (7) when he and his family were involved in a devastating car accident. Connor suffered a traumatic brain hemorrhage, extensive skull and facial fractures, a broken pelvis, as well as fractured tibia and fibula in his left leg. As the reality of his injuries set in and questions of his ability to be able to walk again were discussed, even more devastating news was given to him. From that car accident his best friends, his brother and sister, passed away. What you may not readily know about Connor is that he was a triplet. This began his long road of recovery from the multitude of surgeries, physical and mental rehabilitation he would have to endure. Connor refers to that point of his life as the beginning of his comeback.

Connor has had to overcome such adversity in a short amount of time that many do not endure over an entire lifetime. He has transformed this adversity into motivation to excel in everything he does. As a Senior at Boyle County High School, he carries a 3.98 GPA and is among the top 10% of his class, takes Dual Credit, Advanced Placement and Honors level classes, and is the class Vice-President. He is currently a member and leader in the National Honor Society, FCA, FFA, and Pep Club as well as a member of the varsity basketball team. Over his tenure on the varsity team, he has played in only 16 games. His continues to have physical limitations from his injuries but his mentality and attitude are where he has overcome the setbacks. Keeping in mind that he spent many months dedicated to completely relearning how to simply walk again. His commitment to his teammates inspires them to give their best effort as they achieved a Regional Championship last year.

Those that know Connor experience firsthand of what a true servant’s heart is. He has participated in Dance Blue to raise money for pediatric cancer as well as organized blood drives. Through his hard work and dedication, Boyle County is currently the number one school in the state for most units of blood collected and this initiative has saved numerous lives. Connor is also a creative writer that has used his negative experiences and transformed them into positive thinking. A line from one of his poems “Memories” shows just that. “The beautiful moments unlocked from your mind that transport you to your favorite and most memorable place, are the kind of joy that relieves you from anything.” One teacher, Elijah Edwards, had this to say about Connor: “He is the sturdy oak of our school: his affability, respectfulness, authenticity, motivation, and work ethic have redefined for everyone what it means to be a Boyle County Rebel, and the other students are inspired to be more like him.” His school counselor, Dana Stigall, stated it well in quoting Muhamad Ali: “Don’t quit. Suffer now and live the rest of your life as a Champion. Connor never quits despite difficult circumstances. He continues to live his life as a Champion.”

Keaton, a four-sport athlete at Model Laboratory School, competed in basketball, soccer, track and field, and swim during her high school career. However, all of this was preceded by her initial love of gymnastics. At the young age of nine, she was a repeat Kentucky USAG-All-Around State champion. She was on her way to a third state title when an abrupt knee injury ended that possibility. An unknown skeletal birth defect almost permanently sidelined one whom would become one of the best athletes in the history of Model Laboratory School.

After her knee injury, which came from a cross country meet, pain and irritation lead to a bad dismount afterwards during a gymnastics practice with the balance beam. The daily struggles with increased pain eventually caused her to walk away from gymnastics. Shortly after, she decided to try out for her middle school basketball team. She had never played, but quickly picked up and became good. Her knee pain was gone, her left ankle began to hurt during the season. Her parents took her to a doctor and after multiple appointments, x-rays, physical therapy and an MRI, she was referred to a specialist at Shriner’s Hospital for Children for a left talocalcaneal coalition. The surgeon laid out three options for Keaton; do nothing and play with pain, do nothing and quit sports, or surgery. December 2015, she had surgery.

In the fall of 2016, she took up swimming as a form of exercise to help with her muscle atrophy as well as giving her the opportunity to be on her school’s swim team. As a seventh and eighth grader, she helped her team to regional runner up. After nearly three years of physical therapy, delays with muscle atrophy, pain and swelling, she was released with no restrictions. As a freshman, she joined the high school soccer and track and field teams. She quickly got varsity playing time that eventually led to being named to numerous All-Tournament teams and regionals during shot-put and long jump.

Keaton’s basketball career has led to her dream of being a collegiate athlete. She is currently Model’s all-time leading scorer, with over 1000 points and 500 rebounds and is one of the top 20 scorers in Kentucky. Michael Austin, her soccer coach, described Keaton as “a paradigmatic athlete, dedicated, dedicated and whose work ethic is unparallel. She exemplifies what every coach wants, on and off the field.” Candace Wells, her former varsity basketball coach, had this to say: “I have never come across any athlete who happily put as many hours toward their performance as Keaton. As Michael Jordan once said, “Champions don’t become champions when they win an event, but in the hours, weeks, months, and years they spend preparing for it.” Keaton truly embodies the spirit of a champion; she does not run from adversity but jumps at the opportunity to overcome it.” Keaton has accomplished all of this in sports while maintaining a stellar GPA, VP for her Senior Class, President of the Student Prep Club, and Source of Strength Peer Counselor for students during a time of crisis. It is also not uncommon to find her smiling face at a locally owned coffee shop working from 6:00-7:30am before school. She has excelled in sport, classroom and her community.