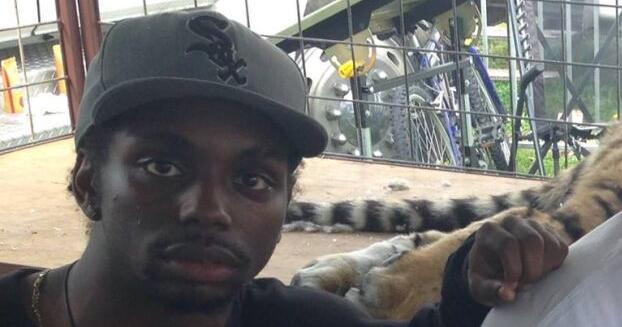 NORMAL — The mother of an Illinois State University alumnus who was killed while driving for Lyft in Champaign-Urbana is trying to start an endowed scholarship in his honor.

Kristian “KP” Philpotts, who was 29, was shot in January. He had graduated from ISU in 2016 as a pre-veterinary student and from Eastern Illinois University with a pre-vet master’s degree. He had planned to attend vet school at the University of Illinois, his mother, Marla Rice, said.

Rice hopes to establish memorials to Philpotts at all three schools, possibly including trees, benches or pavers, she said. One of the largest ways she hopes to ensure a lasting legacy is through an endowed scholarship at ISU.

She has set up a GoFundMe with the goal of raising $25,000 to establish the scholarship. So far she has raised more than $12,500, helped along by an anonymous $10,000 donation, the GoFundMe page shows. The GoFundMe is titled “The Dr. Kristian ‘KP’ Philpotts Scholarship.” Rice started the fundraiser about two weeks ago.

The $25,000 amount is the minimum ISU uses to created endowed scholarships, said Toni Burningham, director of development for the College of Applied Science and Technology. She has been working with Rice on establishing the scholarship.

A $25,000 endowment would be able to set up a scholarship of around $850 a year to start and would grow from there, Burningham said. The endowment also stays open for the future donations toward the principal.

“(It) is a wonderful way to give back; his memory will always be here,” Burningham said. “It’s an open fund, so anybody can give to it at any time.”

Rice hopes to raise the money by this summer.

“It is something on my shoulders until this is done,” she said.

ISU Spokesman Eric Jome said Philpotts’ death was a tragedy and that university staff have been in contact with Rice and are looking to support her efforts.

Burningham said in working with Rice, it has become clear how important the scholarship is to her and would have been to Philpotts.

Getting his bachelor’s degree at ISU was a transformational time for Philpotts, Rice said.

“ISU was the beginning of a lot of different experiences for him,” she said.

Philpotts had a life-long love of animals, she said. While at ISU, he had a chance to take classes and work on the university farm. At EIU he would “rent” animals from pet stores and set up miniature petting zoos for preschool students. He also participated in an annual toy drive for pre-K students.

Along with animals, Philpotts was also dedicated to his fraternity, Iota Phi Theta Inc., Rice said. He restarted the chapter at EIU, which had been dormant for 27 years.

The ISU scholarship would go toward a student in a field connected to animals, with a preference for students in the pre-vet program, Rice said. If no one from the program applies, it could go to another field in the agriculture studies department.

“Just as long as they’re dealing with caring for animals in some kind of way,” Rice said.

Two 16-year-olds and a 17-year-old have been charged in Philpotts’ death, in an apparent attempted robbery, The News-Gazette reported in March.

Rice is frustrated with Lyft’s safety features, saying the company should do more to prevent these sorts of dangers to their drivers.

Read the documents: Inside Illinois State University’s proposal for its new College of Engineering

“This incident is heartbreaking, and families should never have to experience such a traumatic event,” Lyft said in a statement to The Pantagraph. “We care deeply about the safety of our drivers and are always looking for more ways to protect them from crime. We’ve built safety into the Lyft experience from the beginning, and we will keep investing in technology, policies and partnerships to make our platform as safe as it can possibly be.”

Existing Lyft safety features include real-time tracking, which includes reaching out to drivers and passengers if the vehicle goes off-route or is stopped for an abnormal amount of time. Rice says Lyft did try to contact her son, but he had already been shot and could not respond.

“(His death) is something I feel could have been avoided,” she said.

Get our local education coverage delivered directly to your inbox.